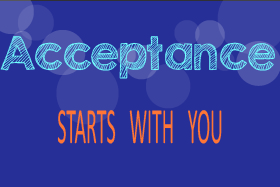 When I was growing up few people had even heard of Autism, let alone understood what it was like to have Autism. The closest people got to having any understanding was what they gleaned from watching the movie “Rain Man.” As a result, oftentimes when I told people I had Autism, I would receive a puzzled look or they would mention the film.

Yes, it’s hard to believe today, but in the late 90’s and early 00’s, there was still not as much information and knowledge of Autism that the average person was aware of. The good news is that as of last year, Pennsylvania relabeled Autism Awareness Month as Autism Acceptance Month. Awareness to me means that you know that Autism exists and a little bit about how it affects some people on the Spectrum. I find it empowering that Pennsylvania has now embraced the concept of acceptance rather than simply acknowledging Autism.

Acceptance is a more powerful concept to me as it means knowing that people are different and embracing those differences. It also means respecting and valuing diversity rather than just tolerating it. What I’d like to see people do for the Autism community is to show greater acceptance, inclusion, and respect. Celebrate the uniqueness and character that is associated with Autism every day of the year, not just during the month of April. Please continue to encourage and foster other people’s awareness and acceptance.