The 2014 Pennsylvania Autism Census Update gathered data about how many children, adolescents, and adults with autism were receiving services in Pennsylvania in 2011, where in the state these individuals were living, and other demographic information.The report includes comparisons with the autism population identified in the original Pennsylvania Autism Census Project, which used data from 2005 and estimations of how this population will continue to grow. The information collected can help individuals with autism, families, and others in our communities understand the landscape of autism in the commonwealth.

In 2005, the Pennsylvania Bureau of Autism Services (BAS), within the Department of Public Welfare (DPW), commissioned the Pennsylvania Autism Census Project, a study to estimate the number of Pennsylvanians living with autism spectrum disorder (referred to as “autism” throughout this report) who were receiving services. The purpose of the study was to reveal the scope and need for autism specific services and programs, as well as to inform policy development and the design and delivery of effective interventions and services. The Pennsylvania Autism Census Project was published in 2009.

The 2014 Pennsylvania Autism Census Update includes more recent data as well as data from additional sources. This update now reflects data from the Pennsylvania Departments of Public Welfare, Education, and Corrections, as well as data from the Office of Vocational Rehabilitation (OVR) and the Pennsylvania Commission on Crime and Delinquency. However, the data reflects only individuals receiving services through one or more of these systems. Therefore, the estimates outlined in this report likely exclude many people with autism, particularly adults, who are not receiving any kind of services, or who are misdiagnosed or not formally diagnosed.

Of particular concern is the growing number of adults with autism receiving services, which reflects an increase of 334% since the original count in 2005. This demographic is estimated to rise to over 36,000 adults with autism living in the Commonwealth of Pennsylvania by 2020, and this dramatic growth is expected to continue as more children transition to adulthood and more adults are diagnosed. Most of these individuals will require services across the lifespan. 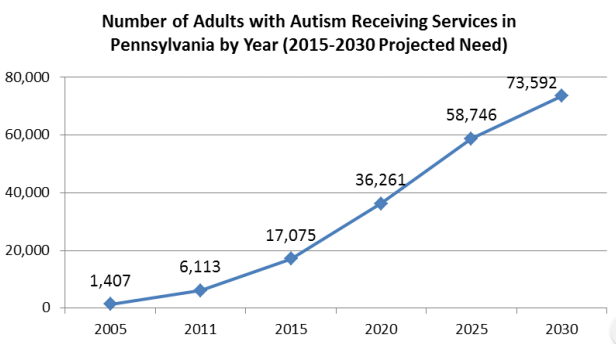 Previous research has documented that the social and communication deficits that serve as the hallmark criteria for an autism diagnosis persist into adulthood and in some cases, may exacerbate, or worsen. Recent research indicates that adults with autism have higher rates of both medical and psychiatric comorbidities than adults without autism, and issues a call for
services and supports to be delivered across the lifespan.3 Otherwise, the risk increases for homelessness, law enforcement intersections, expensive hospitalizations, and poor quality of life. However, in adulthood, the services that have supported children with autism, through the education system and behavioral health services, come to an end. The information provided by this study has significant implications for the Commonwealth of Pennsylvania, regional and county government, service providers, and community resources. The implications include:

Individuals with autism are valued members of the Commonwealth, and it is vital to ensure they are provided the opportunity to live as independently as possible, engage actively with their communities, and experience enriched quality of life.

The 2014 Pennsylvania Autism Census Update is an effort of the Autism Services, Education, Resources and Training Collaborative (ASERT) funded by the Bureau of Autism Services within the Pennsylvania Department of Public Welfare. The effort was led by Dr. Lindsay Shea, Director of the ASERT Collaborative Eastern Region, which is housed at the A.J. Drexel Autism Institute. The mission of the ASERT Collaborative is to enhance the lives of Pennsylvanians living with autism, of all ages and abilities, by improving regional access to quality services and interventions, providing information and support to families, training professionals in best practices and facilitating collaboration among providers of services throughout the Commonwealth.

Autism spectrum disorder, commonly referred to as autism, is a developmental disability that can cause significant social, communication and behavioral challenges. The causes of autism are unknown but likely include few, specific genetic and environmental factors, and there is no cure. With early identification and intervention, however, individuals with autism can achieve better developmental outcomes and live more independent lives with a lower cost to society over the long term.

Epidemiological estimates indicate that approximately 1 in 68 children have an autism spectrum disorder diagnosis, having increased from 1 in 88 in 2012, 1 in 110 in 2009, and 1 in 150 in 2002. Furthermore, it is estimated that nationwide almost 50,000 individuals with an autism diagnosis turn 18 each year. As children with autism become adults, research has found that the need for services and supports does not diminish, and may even increase.7 National research efforts have found that the social and communication symptoms of an autism diagnosis persist into adulthood, and adults with autism have recently been found to have higher rates of both medical and psychiatric comorbidities than other adults without autism.8 However, the services that support children with autism, delivered through the education and behavioral health systems are no longer available after ages 21 or 22, depending on the system.

As an individual with autism ages, their interaction with these systems and the services and supports offered changes. For example, the DPW and PDE Office of Child Development and Early Learning and the Department of Education provide services to children and adolescents under age 21, and the adult programs administered through BAS are only available to individuals 21 years of age or older, with program capacity limited by available resources.

Data from each agency were merged to provide an unduplicated count of individuals with autism who received services. The Department of Public Welfare considered a person to have autism if an autism diagnosis was associated with any Medicaid claim for that individual in calendar year 2011. The Department of Education counted individuals as having autism if their primary or secondary disability category (“exceptionality”) was autism or when they received “autistic” services without the autism disability category in calendar year 2011. Within the Department of Education, individuals may be enrolled in one or two categories.

Data first were merged across Department of Public Welfare (DPW) agencies using a combination of name, date of birth, social security number and Client Information System (CIS) number. This unduplicated dataset was then given to the Pennsylvania Department of Education (PDE). PDE matched individuals in the DPW dataset to individuals in their dataset using a combination of first name, last name, and date of birth. The Office of Vocational Rehabilitation (OVR) within the Department of Labor and Industry provided de-identified aggregate information so individual matching was not possible. Both the Department of Corrections and the Pennsylvania Commission on Crime and Delinquency matched individuals using the same method as PDE. Individuals from the 2009 Pennsylvania Autism Census Project were also added and matched on first name, last name and date of birth.

The gender of Pennsylvanians with autism receiving services aligned exactly with national epidemiologic studies of autism with 80% male and 20% female. This also duplicates the gender distribution from the 2009 Pennsylvania Autism Census Project. Figure 3 displays the 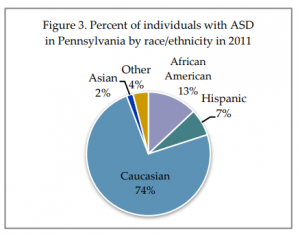 Among the children and adolescents with autism served by the Department of Education, 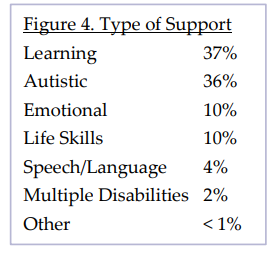 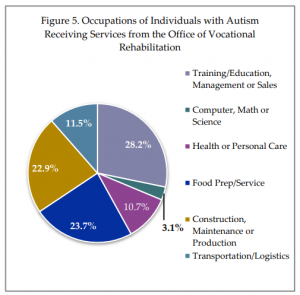 Within the Pennsylvania Department of Public Welfare, the Office of Children, Youth and 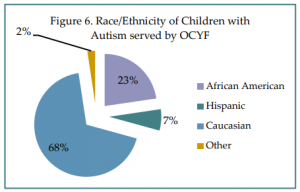 Families (OCYF) served about 1,500 children with autism in 2011. Fewer than half of these children were flagged in the OCYF system as having a disability of any kind. Children with autism served by OCYF were more likely to be from a minority community than children served in other systems (Figure 6). Several counties had especially high rates per capita of children
with autism in the OCYF system including Cameron, Warren, Crawford, Juniata and Tioga counties.

general population of the same ages (including both individuals receiving services from the Medicaid system and those not receiving services through this system) were lower than the rates of contact among juveniles with autism receiving Medicaid services in both 2005
and 2011, and decreased over that same period. This relative over-representation of individuals with autism in the juvenile justice system and the increasing contact rate over time for
this group warrants additional investigation, especially in understanding how it might translate to adults with autism as this group continues to grow. The observed increasing rate of justice system contact over time for juveniles with autism should not be taken to suggest that this group is becoming more dangerous. It does, however, underscore the need for community supports to help individuals with autism avoid crises as well as motivate the development of tools and trainings within the justice and first responder systems on the diverse presentation of autism and appropriate strategies for most effectively interacting with individuals with autism.

The data also reflects the wide diversity of autism across racial, ethnic, and socio-economic groups. From 2005 to 2011, the proportion of individuals with autism representing minority groups rose. This indicates a need for focused efforts to engage individuals from minority communities around autism awareness and support them though the navigation of service pathways. In addition, the data captures Pennsylvania’s diverse geographic composition of rural, urban and suburban regions. Some of the counties with the highest per capita prevalence rates of individuals with autism receiving services were rural and further efforts to understand these variations are needed. In counties with fewer total residents, a small number of additional individuals with autism receiving services from one or a few providers could result in a large increase in the prevalence rate.

Another key finding of the 2014 Pennsylvania Autism Census Update is specific to individuals with autism who are particularly at risk. Children with autism being served in the Office of Children, Youth, and Families in the Department of Public Welfare warrant particular attention given the overrepresentation of children in this system from traditionally underserved and underrepresented communities. Individuals with autism who have contact or multiple contacts with the justice system are another at risk group both because contact with the justice system can be traumatic and misunderstood, and because the short- and long-term costs to the system for crisis events are generally disproportionate when compared to the cost of the services that might prevent such events.

Several limitations of the 2014 Pennsylvania Autism Census Update should be noted. As is described throughout this report, only individuals receiving services through Pennsylvania’s public service systems were included in this count. An autism diagnosis has not been validated among these individuals although research indicates the strategies used to identify individuals with autism yield a high specificity of an autism diagnosis in the community. Individuals who have autism but are receiving services due to another diagnosis may not be counted if the services they receive are not associated with their autism diagnosis. Individuals who may have moved or changed names during calendar year 2011 due to marriage or adoption, or whose names might be different across systems may have been counted twice. Finally, the Department of Education data includes public and charter schools but not parochial or private schools. 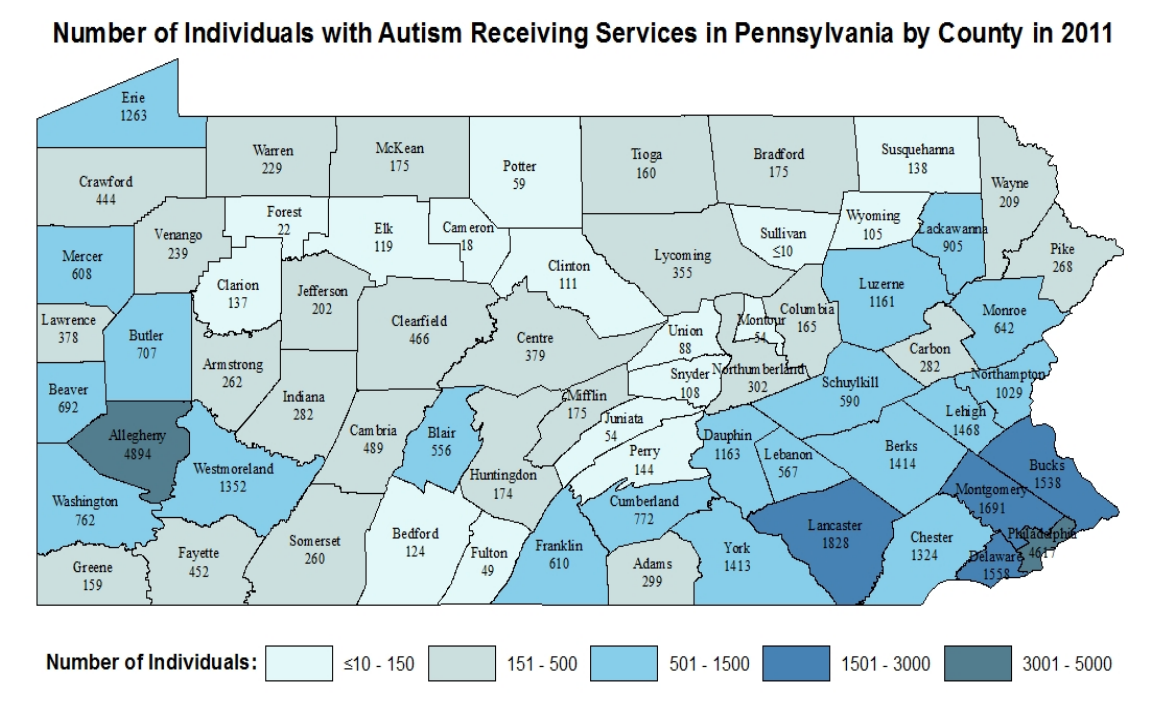 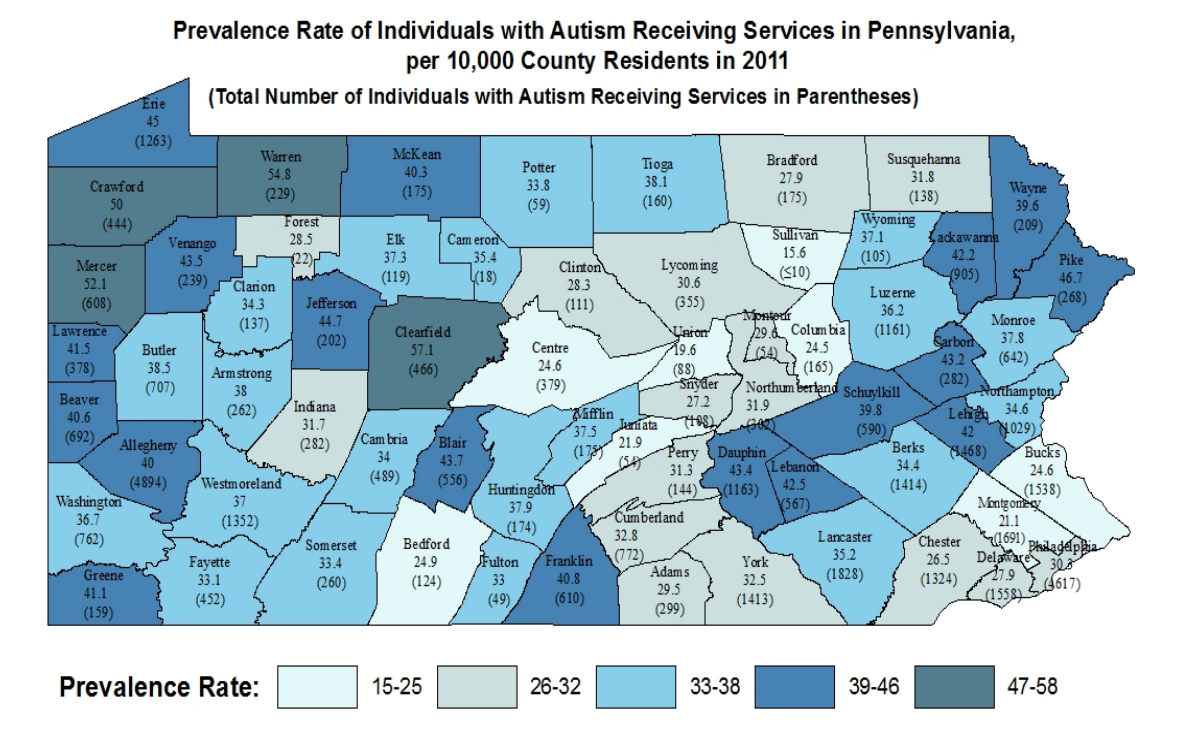 Thank you for rating this resource!

This information was developed by the Autism Services, Education, Resources, and Training Collaborative (ASERT). For more information, please contact ASERT at 877-231-4244 or info@PAautism.org. ASERT is funded by the Bureau of Supports for Autism and Special Populations, PA Department of Human Services.