A Value to Video Games 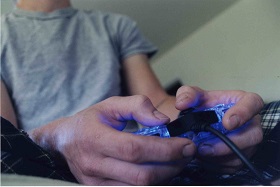 Video games were a big part of my childhood growing up. My interest in gaming started when my Father brought out his old Atari console and even though I was a little too young to fully understand the game, I was fixated on trying to play. The game that I played was called ‘Freeway’ but I just called it chicken crossing the road because you had to navigate a chicken across traffic lanes full of vehicles.

As I got older, I played games for the NES, SNES, Sega, Gameboy(Color) Gameboy Advance, Playstation and Nintendo 64. I played all sorts of games too, racing, fighting, puzzle games, etc but the genre that stuck with me and kept my interest were RPGs also known as role playing games.

Role Playing games are pretty self-explanatory, you play a game and assume a role. Some games like Dragon Quest, Suikoden, and Shin Megami Tensei have you playing as what is called a silent protagonist. The main character (who is silent) doesn’t have any active dialogue aside from choices that you make for them via text options. A big point of resonance for myself was the fact that when presented with a dialogue choice, you usually could take as long as you wanted to ponder the options; unlike in day to day social interactions. If you don’t respond quickly enough in real life or don’t or can’t offer a response, you can face judgments because you are not performing social practices that are considered to be up to par. While playing RPGs that featured a silent protagonist, I never felt pressure to decide on what to say because I could take as long as I wanted to respond.

Other Role-Playing games allow you to assume the role of a character who is active in the narrative; games like Final Fantasy, Xenosaga, and Kingdom Hearts. Like storybooks, the character you are playing as has motivations and feelings about the world that they live in. Playing as these characters, I felt was fulfilling, because it allowed me to take on another’s perspective as they progressed through the game. Of course, it being a game, battling monsters and bosses as well as leveling up characters were fun, I just really valued the experience of getting to know the characters better. While I can be reserved, I could play as someone who is optimistic and sociable. Playing as someone with a similar personality type was great as well because they reacted differently to choices that I may not have made myself, so I was always learning something about different perspectives and how others handle them.

Some would say that there isn’t value in video games aside from being fun recreational activities but for myself, I valued that time spent learning about new characters, settings, and story elements. I didn’t feel the same judgment from games that I often got from interacting with peers and adults. Games also came with manuals that described how to play in detail and even offered tips. Such a succinct guide isn’t available in life. You can’t pause life but you can pause a game, learn the material and continue playing, life, by comparison, isn’t as simple.

As I’ve gotten older I don’t have as much time to play games as I used to. But in certain cases, I find myself thinking about dialogue choices that I have to make in my daily life and think about certain responses I would get if I gave a particular answer in an RPG. Of course, magic and dragons aren’t real but there are all sorts of characters in games and in life and you can learn valuable things from both.