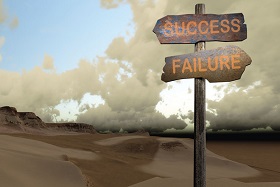 Failure can be good for you to learn and to grow as a person. Too much success during your life can result in having difficulties with failing and being successful with moving forward. However, I have found that too little success mixed with false praise can be just as bad. I have seen how being unable to keep up with the rest of the kids affects special needs children. One may have the thought, ‘Why should I try because my best never measures up, even though I try really hard.’ Often, adults look for a reason to praise you even when it is silly or insulting. Failure is okay and necessary, but you should also have some measure of meaningful success.

I especially struggled with feeling like a failure for not measuring up to most models of success. For example, in high school my difficulties with math placed me in the remedial math classes where the majority of my classmates had already “given up.” I am horrible at math, even with help, so telling me to “work harder” didn’t help me overcome my learning disability. I was pretty smart and I worked hard but I don’t think that would have been enough to get me through school. I was lucky enough to have a good support system that understood how difficult school was for me. My support team made a point of praising me when I improved and encouraged me to do better when I was slacking. I felt like they understood and respected me so it was rare for them to give me false praise.

You probably know what I’m talking about, that exaggerated praise that is out of proportion to what you have achieved. The attitude that they’re talking to someone younger than you are, as well as less knowledgeable and experienced. False or excessive praise is embarrassing and frustrating. It makes me want to say “I don’t know you.” I have a relative who makes a big deal of every time I travel by airplane, emailing the extended family as if I achieved something new and challenging. It would make sense if I had never been on an airplane but I am a seasoned traveler. As you can probably tell, this is a sore spot for me.

I really wish people would not use false praise since it’s obvious and to me, quite offensive. I find that it is a subtle put down as it can make people feel poorly about themselves. I am not sure there’s any way to make people stop using false praise, however, I can control the way I react to that false praise. I try to focus on what my achievements are and areas of success. If all else fails, keep in mind that a person’s excessive praise often says more about him/her than it does about you or your achievements. I find it more meaningful to decide what counts as success for myself instead of relying on what others may determine as success.