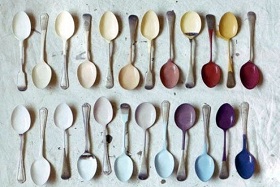 Spoon Theory. You may have heard of it or you might have not. Either way, I’ll be providing a brief overview of what it is and it’s significance in explaining to those who lack a bit of understanding, that those with mental illnesses, physical impairments or those with executive dysfunction have to put forth a great amount of effort to do things others don’t think about sometimes.

Christine Miserandino, a woman with lupus created the spoon theory while sitting down for a meal with her college roommate at a diner. Christine’s friend asked her “how it really was to live with lupus? Then asked about the toll that it takes on a person.” Puzzled by the question, assuming her well-known friend knew all there was to lupus, Christine was stumped for a moment. She quickly noted spoons on the empty diner tables and grabbed around 12 of them. Handing them to her friend, she told her to think of a regular day in her life and Christine would take away a spoon for each task.

From just getting out of bed, which would cost one spoon to choosing an outfit for the day, going to work, making lunch. All of those choices would cost one spoon each. Want to make dinner at the end of your day but only have one spoon remaining? You can’t clean up the pots afterward because you have no spoons (or energy left). Through these examples, and taking away a spoon from her friend each time she wanted to complete a task, Christine watched as they grew frustrated and upset. And at the end spoon theory exercise, they asked “How do you do it? How do you live every day like that?” Christine replied: It depends on how many spoons I have for the day, how many I get the next day and so forth, it varies depending on factors with my body or other conditions.

The spoon theory summarizes the limits a person can have while dealing with the autoimmune disease lupus. Others who have a range of physical disabilities and even those with mental health conditions have utilized Christine’s example in order to succinctly explain what life is like when you don’t have the energy, strength or general fortitude to complete tasks others take for granted.

I can relate to the spoon theory because as a person on the autism spectrum, being overstimulated can take a toll on me and adding in executive dysfunction sometimes I can feel exhausted to start another day even after getting a good night’s rest.

For example, if I go to the bank before I even go in, I note the sensory effect of touching the door handle to proceed. Walking in-between the double doors, I note the stagnate air before I touch the other handle finally walking into the bank. From there, it’s a matter of waiting in line until I’m called by the teller. Sometimes a person is too close to me and I’m at a loss on how to tell the person to take a few steps back, without appearing to be rude. After that, I’m called by the teller, complete the transaction and on my way out I’m confronted by the doors that caused sensory discomfort on the way in. The simple task of going to the bank for most people is something I can have trouble with. It depends on sensory elements and my ability to handle them that day.

Having a day full of “simple” tasks can be overwhelming. Touch, smell, taste, hearing. Those stimulations can really leave me feeling drained after a day of them unable to, in Christine’s example wash dishes at the end of the day filled with those tasks.

The spoon theory is a person’s analogy to explain how they deal with daily life. It’s not the end all be all to having a conversation, and it would be a mistake to take Christine’s writing and then say, this is the only example that can be used to explain a person’s life with limitations. It can be a useful tool to start a conversation and then explain, sometimes you don’t get any spoons the next day. Sometimes a task can take multiple spoons.

Just listening to someone talk about their struggles and dropping expectations of what they “should” be doing does go a long way in understanding their life and makes it easier on them. Believe me, there are many things I wish I could complete in a day, sometimes I just run out of gas. Sensory overload gets the best of me. And it’s not for lack of effort on my part. I think the spoon theory has been helpful in explaining limits to friends and family. It starts a conversation and with it potential accommodations and less judgment.

You can read more about the spoon theory here: