Self Wellness: What Does it Mean Now?

(Opening) I. Wellness to self, what does it mean to me now?

Since it is mental awareness month, I wanted to talk about how I often get nervous over small things and share that and give some of my own perspective on how I often handle it. It isn’t much but I do want to keep in mind that others have been somewhat nervous sharing things that worry them or even break them down, and in my case, it is something that doesn’t happen to me often because I think about some ways I can de-escalate problems after they happen.

I am not sure if this is a good example because almost any test or meeting is something that is bound to scare anyone anyways, and the preparation is almost the same every run. What I mean is that I knew what I was getting myself into before I got on the road. I know how to park, I know how to drive and I know how to handle driving with traffic, but it’s bizarre that when I do it on the test (which is set differently because of the COVID restrictions) it seems easier and somehow difficult at the same time. So to put it this way, I am a visual learner, and I would prefer to follow what I am driving into by what I previously learned and what I can see, but now I am getting someone to tell me what I should do. It does kind of break the previous habits that I have before, so of course, I could break down and become confused on what to do because I have no idea on how they are saying it and if I am doing it right, although I have done it before.

I am pretty clumsy in some situations that are out of my control. For example,  some of these may involve trying to remember if I dropped something or staying in a place a bit longer than I should just to make sure I have everything in my possession. However, there are times where I would have someone impatiently waiting because of the time that I have chosen to think. This can involve taking public transportation and having to miss them, leaving an uber/Lyft driver and having them wait for me and possibly leave me, or reschedule an event because I can’t seem to remember where one mundane item is was. To give you a short example, I don’t really like to publicly show my things to any of my friends, co-workers, or sometimes family; because there was a time that I have left my school bag (this was in 2011-2012) on public transportation, it didn’t hit me on how much that actually affected me until I was partially home and realized that there were lots of important things that could’ve been stolen. I have overreacted publicly and even went as far as trying to talk to anyone at the public transportation facility to see how I could track down the bus and get my stuff back. This did make me beat myself up pretty hard because I did want to be a somewhat responsible person on my own, but eventually, the fact that I have owned up to it helped me grow as a person, and eventually, I did get my stuff back because I had left my contact information in the bag.

So just to add on, some of the events aren’t always about the things that I have lost. Sometimes I do feel as though I do overwhelm myself to try to be the best that I can be without accepting the flaws I have and acknowledging that others are there to help me. Maybe it’s because I don’t want to call for any sort of help because I find it embarrassing or maybe I don’t want to admit some of my weak points because I think it may not work out well in my favor. So, I prefer to do things by myself and keep pushing until my problem is solved to the best of my ability instead of figuring out how to do it properly or with assistance. I am not saying that it is wrong that one does that but it is pretty neat if I were to go and take as much time as I need to do a task and ask someone to not just help me with a task, but even to help me feel better about myself whenever I feel down.

Since we are at the halfway point of this year, I feel as if there has been a theme of asking for assistance or helping others when needed (at least for me) because it has been one of the things focused on my own wellness. Whether it’s been at my job, which is focused on wellness, or even finding the time to relax and have a good time with others instead of worrying about something I could finish later or even by myself. I have seen that one of the ways to calm down whenever I worry would be to share with someone close on how I feel and even listen to them so I can take in their advice and possibly relate and have a friendly conversation in exchange. I know that others are willing to actively listen to me and I would like to do so in return.

I have found ways to break out of the habits of breaking down and getting nervous. For example, after a presentation, I would have a relaxing song playing in the background; and for me, it’s usually a relaxing video game theme. Or I would often take a picture of a place that I have visited to escape thoughts that I was having in that situation. Recently there was one time that I have taken a picture of a sunset at Penn’s Landing’s bridge and it was a calming moment for me. I don’t know if it’s because I am a visual learner but sometimes things like revisiting a beach, a relaxing spot, and even editing a picture I enjoy is one of the things that would push me through a tough time. Sometimes talking to others about how I feel or even going as far as telling a comforting joke, story or letting someone know that they are going to be okay is one of the things that can be calming. Not to mention, prayer, a small rest or just taking a small break can be one of the things that can work for me as well. If I am not going to an event tense or thinking if I am thinking of something else that soothes me, then I feel as though that I am at peace. 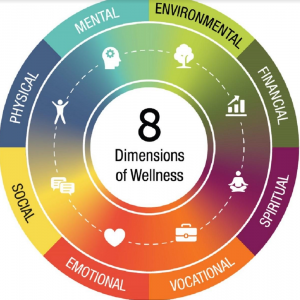 Since my job is based on wellness, I am very familiar with the 8 dimensions of wellness and I think that I have mentioned the physical side before in a previous post. In that take, that’s where I have mentioned physical wellness and wanted to keep consistency. But sometimes trying to work on all 8 consistently can be difficult. It seems as though it shouldn’t have to be difficult but since I work on things in a manner where I  list things down, it does become a problem where I am not displaying those forms of wellness as I thought I would. So, the 8 dimensions of wellness are: spiritual, financial, vocational, physical, intellectual, environmental, social, and emotional. With learning the 8 dimensions, sometimes I don’t even notice that I am doing the one that I am not focusing on and that’s how I know I am doing well with my wellness, when I know I have impacted them without having to think about which of those 8 I have used.  The impact of this chart has made me see that I have become a less nervous person and has made me accept the mistakes I made (and that I will make mistakes in the future). It’s a form of self-acceptance and eventually building myself up to being a better person.

I feel like I didn’t put much into mental health, but I would also say that I have learned a lot about myself as well. I know that there are lots of things that I don’t know and that I even would love to educate myself about. Whether that’s in the form of my position as a CAPS where I can learn from other individuals on the spectrum over things that I might encounter, where I can read on other experiences, or even something as simple as taking a wrong turn and learning that is there the next time I return to that direction. It’s often “minor mistakes” that I would make that would greatly affect me but wouldn’t look that bad from someone else’s perspective that would cause me to worry but since been impacted by those experiences I know that I can learn more and become more aware for the next time I ever come across something that would make me nervous or just breakdown without having to do so. Other than that, I hope that everyone is doing well this month and the upcoming summer ahead and have a good one!