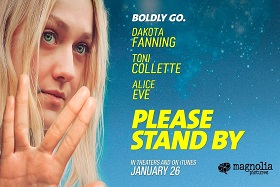 Films surrounding the subject of autism can be very hit or miss. Sometimes a movie will treat a person with ASD like furniture or an immeasurable burden upon their family. Other times, you can get an endearing depiction of autism, and you wish more narratives were like this. Recently I had the opportunity to watch “Please Stand By” featuring Dakota Fanning playing a young autistic woman. I found the movie to be a joy to watch as it was both heartwarming and showcased the hurdles someone with ASD deals with while preserving their autonomy and life goals. This month, I’ll be reviewing “Please Stand By,” and talking about concepts and tidbits I found to be thought-provoking while watching it.

Before I even talk about this film, I want to highlight how rare it is to have an autistic woman being the focal point of media. Anyone can be autistic, and gender is not something that precludes the condition. With that said, depictions of the female perspective regarding ASD can get overlooked. I hope that this continues to change, and women on the spectrum are represented more often.

The premise of “Please Stand By,” focuses on a young autistic woman named Wendy. She is a massive fan of Star Trek and an aspiring scriptwriter who enters a screenwriting contest hosted by Paramount Pictures. Early on, we learn that Wendy lives away from her family in a group home and that Scottie her caregiver works with her to create a structured itinerary. Wendy works at Cinnabon and utilizes her vast knowledge of Star Trek to win bets with her friends. This film’s ability to show the audience that Wendy has a life and is doing her best even with some limitations serves to humanize autism.

Things take a turn when Wendy’s sister Audrey informs her that she’ll be visiting. Audrey is Wendy’s primary family member as sisters’ mother passed away at an undisclosed time in the past. Based on context clues, we can piece together that Wendy lived at home up until her mom’s death and afterward transitioned into a group home setting. Moving on to the day of the visit, it doesn’t go as Audrey has planned. Wendy would like to meet her niece and move back home, and the sister doesn’t think it’s a good idea. An emotional episode occurs, and Audrey leaves in a huff. This scene bothered me for a few reasons. First, why hasn’t the sister been at least checking in with Scottie the caretaker to receive progress reports on Wendy’s growth and the skills that she learned along the way? And second, there are a few scenes that touch upon Wendy’s and Audrey’s childhood. Audrey has emotional holdovers from past events but doesn’t allow growth to reshape the relationship. The lesson from this interaction that I think is important is being able to check in with someone to be on the same page. Audrey wasn’t present in Wendy’s recovery journey and initially wasn’t able to respect her sister’s growth and change.

Now to talk about the overarching plot. Wendy has worked tirelessly on her script. She has waited until just a few days to send it in. When it’s time to mail it in, she realizes it won’t get there in time due to a holiday. That’s when the idea to take a trip to Paramount Pictures solidifies, and the meat of the movie takes off. I’m not going to talk about any more plot points because I want those who are interested to enjoy the film without being spoiled completely. What I will say is, Wendy’s intelligence and ingenuity shines through in her trip.

One significant thought I had while watching this movie was the title. Why is it called “Please Stand By?” The title is a phrase for a coping mechanism Wendy utilizes when she’s upset. “Please Stand By” is a mindfulness check-in to assert that regardless of the circumstance, with enough time you will okay. I think that this phrase is significantly more approachable than “Just Calm Down.” When you tell someone to calm down, it’s an order. When you tell someone to stand by, it allows the individual to digest their environmental stressor. So, I enjoyed how the title played in this movie.

In closing, “Please Stand By” was one of the better autism films I’ve seen and I recommend it. Wendy’s character is intelligent, resourceful, and believes in her self. Autistic struggles are humanized in this movie. Wendy is front and center in this picture and not sidetracked for another narrative. While I do have a couple of hang-ups with Audrey’s characterization, I think this film is a great one overall. We don’t see women on the spectrum front and center like this and hopefully the continues to change, and we have the diverse narratives we need and deserve.