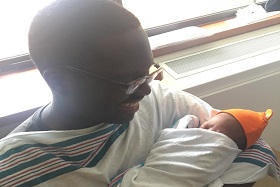 In mid-October last year, my sister announced that she was pregnant and it was by far the biggest surprise for me because I came to the realization that I was nervous at this point in my life to become an uncle. I wondered if I was even going to do it right since I have a fear of not watching anyone to learn how to be an uncle. But as time went on, I tried to gain confidence over this and have a sense of maturity.

I had this sense of worry thinking that I might not connect with my nephew that well, because I feel like I don’t really connect with anyone. But the very moment I held him, I felt most of that negativity going away, I felt that closeness that I had with my sister (which was really deep since we grew up in the same household for so many years), and it made me wonder what I did when I was an older brother, that maybe I wasn’t the best at being there for my sister because I was afraid.

Being an uncle may not be an easy process, and I have come to the realization that I may not know how to easily connect with him but I want to do my best, even when I go back out to college. As of now I feel even closer to him and more ready as time is moving. Despite the fact that I’ve seen myself mature, I think there will be a lot for me to learn about myself, and I might be able to share that with my nephew.

At this point of my life, being an individual with autism, I feel like this will be the start of a new beginning with a new set of responsibilities that will include being more aware with myself and hopefully developing some closeness to more people in my family.