Do I Have a Luggage Issue? 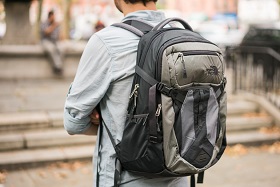 I often don’t know what I need for an everyday trip, so I would just take my backpack with me. Half of the time, I would feel as though it’s needed and sometimes…I don’t. It’s not something I would question usually, but it is something I think about these days since I’ve been in the mood to take an unnecessary amount of things with me. Maybe I am just terrible at taking a proper load of things with me and need to learn that “less is more”.

Like, I don’t get upset if I leave something behind, but toward the end of my journey I often realize I packed things without really thinking about them and ended up not needing or using them. It’s been a really weird feeling at times that I just need to take certain things with me anyways.

So my backpack usually consists of my Nintendo 2ds, my cellphone charger, some comics (and this may be way more than what I intend to read in a day), my laptop (if I’m going to school), a hat or two, and a jacket (depending on the weather). I feel as though I need to take these things everywhere I go because it just feel comforting to have them, rather than taking them because I need them, and that’s where my issue comes in. Whether it was too much time in school or just generally taking lots of stuff with me every time I leave, I now have this urge to take almost anything with me on almost every trip.

I want to get in the habit of trying to get used to taking less stuff with me the next time I go out and do stuff, but even though I have tried to do this under so many occasions, I still tend to worry about certain things that I have forgotten and rush back for them.