Despite Tragedy A Community Showcases Love, Hope, and Resiliency 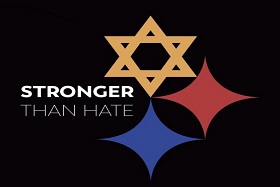 On October the 27th the city I live in awoke to what appeared to be another typical morning. Pittsburgh is a busy city filled with the hustle and bustle of everyday people going about their day; however, this one, in particular, changed everything. At the Tree of Life synagogue, in Squirrel Hill, a gunman chose to commit the ultimate sin and take lives. The senseless and needless violence ended the lives of 11 people and injured six others. The gunman was apprehended, and I won’t be discussing that person further. When terrible things happen frequently, we focus on the one who committed the act instead of those who were victimized by them. Pittsburgh in this instance chose to love, support and embrace the local Jewish community with vigils, blood donations to local hospitals, and financial contributions. Streets were filled with everyday people showcasing that hate isn’t a part of our community. That we will always stand with those, who are victims of hate crimes. That love is a stronger emotion than the hatred that seeks to destroy it. We are a community, and we will always stand firm for those that need our help.

Fred Rogers who hosted Mister Rogers’ Neighborhood once covered the subject of “Helping Children Deal with Tragic Events in The News.” And a famous quote he said was something his mother mentioned to him as a young child. She said: “Always look for the helpers. You will always find people who are helping.” That’s a notion that can apply to anyone despite their age. In any tragic event, you will see communities help each other.

The famous poet Dr. Maya Angelou said: “Each one of us has lived through some devastation, some loneliness, some weather superstorm or spiritual superstorm, when we look at each other we must say, I understand. I understand how you feel because I have been there myself. We must support each other and empathize with each other because each of us is more alike than we are unalike.” That’s true. We all can come from a different background but can empathize with each other.

Supreme Court Justice Ruth Bader Ginsburg is quoted saying: “Fight for the things you care about, but do it in a way that will lead others to join you.” After the shooting, I saw people offer to deliver baked goods to those who have been traumatized by this event. Invite people into their homes for a meal, to talk, or just being present with another person. Others seeing those actions were motivated into helping others as well.

I share these three quotes because it proves that being empathic is a universal trait, that goes beyond race or religion. Those who perished on October the 27th will always be remembered. The Tree of Life synagogue always had and always will have the support of Pittsburghers. The Jewish community will have our support, and we will give them our strength during this time of tragedy.