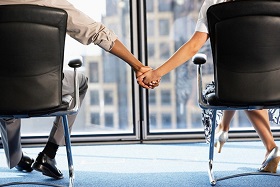 Last month, I wrote that marriage can be a bumpy road, but that there’s nobody I’d rather do this with than my husband. I will never doubt that he cares about me or loves me. Sometimes, I think that he may care or love a little too much. Everything he does, he does for me. That includes things I don’t want or need him to do, like fighting battles for me.

He and I currently work in the same environment. While we are in the same department, we have separate sets of responsibilities. However, we still work with a lot of the same people all over our building.

I will admit that sometimes I have trouble interpreting my supervisor’s instructions or what other co-workers have said. Due to this and the fact that our jobs can lead to many long days or nights, tensions can run high between co-workers. Sometimes, one of us may get into an argument with someone on our respective side of the department. Usually, when I do he tends to get in-between and then approach me about it, whether inside or outside of work hours. I have tried many times to keep our work lives separate from our at-home lives. I try telling him that if he were simply my co-worker, he wouldn’t be approaching me about a quarrel with another co-worker after hours.

Whenever an issue occurs like this, he tends to claim that our co-workers come to him because they think I’ll get angry and overreact. This leads to me getting angry at him for not telling them to approach me about it and attempting to handle it himself. It almost feels like a never-ending cycle. However, I know he’s doing it out of love and wanting to protect me. I feel he also tends to lean towards me always being the one who causes the problem. I’ll admit that some of the time this is true. However, when the initial argument isn’t my fault, he still tends to blame me.

I think this has to do a lot with the fact that I received my diagnosis so late in life. At work, most of my managerial staff is aware of my situation. A few of my co-workers are as well, at least to my knowledge. However, due in part to the way I was raised, my diagnosis isn’t always apparent. One of my supervisors has experience with a close relative being on the spectrum, however they are on a different place on the spectrum than myself. I can tell she tries to be more patient with me than others at times, but other times, I think that even she forgets my diagnosis.

I know I’ve written a lot about working with my husband in this post and the situations that go along with that, but it doesn’t always just happen at work. We used to do a volunteer project on the weekends for one month out of the year. Many of the others involved knew of my diagnosis. However, this didn’t stop my husband from shifting into protective mode when situations would arise and he would immediately shift into protective mode and try to intervene between myself and the other person, instead of having them come to me.
I guess I wrote all of this to say that standing up for myself in our marriage can be a daily struggle. Lines can tend to get blurry because he and I are both doing what each of us thinks is best.