Leadership: How I Became a Committee Chairman 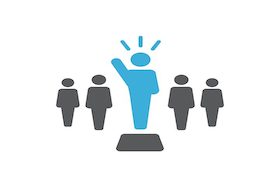 When I think of a leader, I think of someone who is strong-willed, outgoing and a great listener — someone who can captivate an audience and draw attention to important issues. Are those qualities something that I see in myself? Not growing up, but today, as someone who is the current chairman, and youngest ever confirmed for a voluntary ambulatory services committee that works in conjunction with one of the largest providers of medical care in my city, I’m now that leader.

I became aware of a volunteer opportunity after the committee facilitator invited me to come to one of the sessions. When I first attended, I didn’t contribute anything vocally; I mostly observed as I became more comfortable with the environment and got to know fellow group members. Then finally, I added to the dialogue and what I noticed was that people listened. They found my comments to be insightful and well thought out. That gave me a sense of empowerment to be able to contribute.

It was about a year and a half before I was asked and voted in to become the current chairman. I was nervous, and this type of leadership opportunity was new for me. But I thought you don’t learn unless you try something different and I decided to take on that challenge. When you are the chairman, you’re able to select on the current project the committee will work on, and what I wanted to do was provide resources for adoptees. So, with the help of my fellow members, over the next few months, we worked on finding resources and creating a flyer that would be both accessible and informative. As someone who is adopted myself, I have firsthand experiences with the resources provided on the flyer, so I knew they worked. They also weren’t tied to any company; they were government resources that went under the radar because adoptees are underserved populations. My project, for the most part, is a success. A medical provider currently is reviewing it, and once I have approval, my committee’s flyer will reach a lot of people, including those who are an in-patient in hospitals. I’ll be sure to update everyone here and show everyone that flyer once the review period is complete.

Leadership is something anyone can do. It’s going to be a new experience, and it’s going to be challenging, but I believe that you can do it as well. Disclosing that I have ASD allowed others to see the condition in a different light, and understand that we have a wealth of knowledge and experiences that we can bring to the table as aspies. One piece of advice that I can give is not to try to change your personality because as someone who is soft-spoken and not the most outgoing individual, that brings something to the table. I decided to write about my leadership experience because it is autism awareness month and I just wanted to showcase that we can be leaders as well.