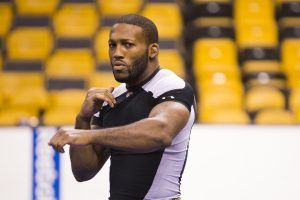 Black History Month is a time where we recognize the contributions of African Americans in American history. I once wrote about Roland Johnson, a former patient of the infamous Pennhurst state hospital and how he became of a proponent for disability rights to ensure that those with disabilities would be able to reside and stay in communities rather than be shipped away and institutionalized. This month, I would highlight more a recent contribution to Black History with someone who stumbled upon a diagnosis of autism and how he shaped that into encouragement for those in special needs classes that often go underlooked and underserved.

John “Doomsday” Howard, born March 1st, 1983 is a professional mixed martial artist ( abbreviated as MMA) whose career spans over 14 years within the sport. He has a record of 27 wins and 14 losses and has competed in the International Fight League, the Ultimate Fighting Championship, CES MMA, and the Cage Fury Fighting Championships. MMA is a high octane full-contact combat sport that combines  martial arts disciplines and grappling. When compared to another fighting profession like boxing, MMA fights can be quite dynamic and exciting.

Because the competition is full contact with limited protective pads for either fighter, there are injuries and athletes within the sport also have to undergo medical screenings. During a standard neurological exam, John Howard was put through a series of questions, and his attending physician noticed specific patterns in John’s childhood, far too many to be a coincidence. Their advice was that Howard undergoes a non-invasive examination for autism. When the results came back, Doomsday received his autism diagnosis and with it a better understanding of his youth and childhood difficulties.

John Howard grew up in the Dorchester neighborhood of Boston Massachusetts. He lived with his mother and brother and attended public school. Since the outset of Howard’s schooling, he spent most of that time in special education due to his learning disabilities. In his community resources for disability testing were limited, so any child perceived as having learning difficulties were put into special classes. Speech came slowly for John, and he had to work with a speech therapist to develop conversational skills.

Adding to those pressures was bullying, his classmates asked why he was in special education and why he couldn’t talk properly. Those experiences, in his own words, made him feel “stupid.” Being berated by his peers left a lasting impact. As an adult with a formal diagnosis of autism, he understands that the schools didn’t have appropriate anti-bullying methods. He understood that he wasn’t “stupid.”

Doomsday’s advice for teachers working with those who are special needs is this:

“Be patient. Teaching is a tough job, but you have to be patient. Your education can tell you one thing but actually sitting in front of a child and having a one on one conversation can help you better understand their needs. Not all special education is bad, and I think teachers who give their time to children do care about them.”

When asked why he came forward with his diagnosis, John Howard stated quite adamantly that he did it for children in special education.

“I think it’s my responsibility to let these kids know that, I came from special needs classes and I was able to achieve my goals. “If I can make it, you can.” Now kids have the inspiration to say if he can do it, I can do it too.”

Howard also states that it can take him over 100 times to learn something new, but once he learns something, he doesn’t forget it. In media interviews, John says that he has to think several steps ahead, so he’s prepared to answer questions. For Howard, his autism diagnosis at 33 gave him a better understanding of who he is as a person and can apply that knowledge to make sense of childhood behaviors contrasting them with his adult life experience.

“Now a lot of stuff in my life makes sense. Now I’m thinking about my life, it makes sense why I do certain things. Even to this day.”

What we can learn from John Howard’s experiences is that resources for children are vital. The Centers for Disease Control and Prevention highlight the fact that African Americans and Hispanics with ASD may not be identified due to socioeconomic status or other barriers that lead to a lack of or delayed access to evaluation, diagnosis, and services. They also note that the gap may be narrowing when it comes to getting that diagnosis and support.

Autism Spectrum Disorder is broad, and I think it’s essential to see athletes like John Howard who choose to disclose publicly. Being able to see real-world examples of people with ASD helps de-stigmatize the condition. February is an important month that celebrates Black History. Along with Rosa Parks and Martin Luther King Jr., disability advocacy is an integral part of the civil rights fight. MMA Fighter John “Doomsday” Howard is helping to push the conversation along when it comes to ASD, and as someone also on the spectrum I thank him for that.

Spotlight On: Racial and Ethnic Differences in Children Identified with Autism Spectrum Disorder