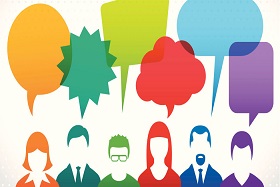 Every now and then, I get distracted on small things in conversations, not saying that’s out of my control but sometimes I can’t really go through a whole conversation. Sometimes I am not aware of the topic of the conversation and may wind up spaced out…, but does that truly mean that I do not understand what someone may say to me? This answer is a so-so because I really don’t know why I sometimes do that and other times I don’t feel that I am ignoring anyone, it just comes at an automatic pace that I just can’t focus on long conversations.

One of those few things could be that I have a very short span. Sometimes, I will claim that I take interest in a topic, but I just can’t seem to focus through and through. I won’t give any signal to stop, but I will try my best to only listen to as much as I possibly can. If I feel as though I can’t take what’s being interpreted to myself, then I just shut down, and possibly at some eerie times. Like suppose it were a movie, group discussion, or audio recording, I would probably enjoy the first 10-20 minutes and then I would lose focus. This would immediately wake me up without the intent to “go over” or “repeat” because I intently want the conversation or topic of discussion to end.

Even though I am a “social butterfly” I don’t really like to speak or act if I’m in a large crowd.  I can’t tell if this something anyone would go through, but If I don’t lead in a group, I usually don’t speak. I just observe and I’m collective of my own environments. This means that I just don’t really notice what anyone would be doing at that moment. Usually when I’m with a group of people just doing any social event, I could easily lose track of time of stay, people who are with the group, people’s names, or sometimes even get lost in a certain area just because I never asked anyone what was happening at a particular moment. So because of that, I just remain silent even in the event where I am called on in a large group setting.

Even when it’s not involved with a large gathering of people, I can also have difficulties with  social cues. Like sometimes, my facial gesture can sometimes be a dead stare or have a look of anger, when really that’s not how I am feeling. I do understand that expression is a huge part of social cues and I can almost always read your expression as hard as its to read mine. Maybe that’s what I really need to get into doing more, get a better understanding of my facial expressions so others can truly understand how I’m feeling instead of what I’m feeling. I have picked up emotions by listening to different genres of music, but that’s where emotions just seem to stop at, hearing how others feel and not making any sort towards my facial cues.

Sometimes, my body movement can even be off. Like, I believe that there’s really no such thing as a certain composed body posture when you are communicating with your peer, but sometimes I may seem stiff or tense when I move or give the impression of where I want to go next. I can’t see that, but I know that sometimes when I am with others and they ask how I am doing, I would respond with a “just fine” whereas it may seem that I am not. Another thing is that I don’t know how my body gestures may seem when I am moving in a slow pace. One way I would try to break that barrier is picking days to run where I would try being in pace with my back upright instead of slanted down. Not saying that it would change how I go about a social setting, but it would help my mood since I sometimes feel gloomy because I am so hunched, along with the posture making me feeling uncomfortable, and sometimes I just want to see what’s in front of me instead of below me. So, it’s more of a habit want to break out of than a social norm, but it could potentially help with my posture and mood.

However, I feel as though I don’t really pay that much attention to heavily detailed characteristics of someone (or myself even). I do realize that I have some things to improve as well (having the fact that I wrote this), I do wish to go about working on understanding social cues from others, and myself in the future!