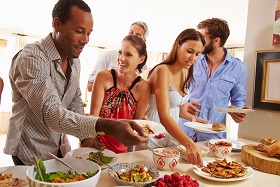 This December my parents hosted a Christmas party at the retirement home that my grandma lives in.  Both of my uncles on my mom’s side were invited with their families along with my sister’s boyfriend.  This was the first family reunion that we’d had in several years and we wanted to make sure it went well.  In the past large gatherings like this had made me uncomfortable, but I decided that I would engage in the party by trying some different social strategies.

To take stress off of my parents and to keep engaged with everyone I took the initiative and started organizing the party as it unfolded.  I set up the small speaker that we’d brought with us to play Christmas music, set out sweets at each table, and met both uncles and their families at the front desk to escort them to the small hall we rented.  As I did all these things I found it easier to interact with my family when I had something to do.

When everyone had arrived I helped set up all the dishes each family had brought and made sure everyone got enough food.  While we ate I spoke with almost everyone and caught up on the events of their lives.  I learned that one cousin was going to Australia for college and another had moved out of her parents’ house.  It was also nice to share the recent events of my life with my relatives.

After we finished eating we all gathered in a decorated sitting room with a Christmas tree to have a gift exchange.  Then we went back to the hall where one of my uncles put on a football game after I discovered a large TV in a cupboard.  While the family talked, watched the game, and my young second cousins played, I could tell that a number of people would soon start to crash.  It felt good to be part of the group rather than being isolated in a corner.

We had full access to a kitchenette attached to the hall and I was able to find a coffee maker.  With no prompting from anyone I brewed a pot of coffee and set it out with cream and sugar that I found for everyone.  I was quickly met with appreciation as nobody else had thought to bring or make any coffee.  Engaging on my terms rather than being forced made all the difference.

I’ve found that when my parents host a party it’s best to push past my natural inclination to remain on the sidelines and not interact.  The best way to do that is to take initiative despite my reluctance to do so.  Engagement can make social situations more enjoyable and less stressful. My advice is to stretch your social skills in a safe place and get out of the corner.