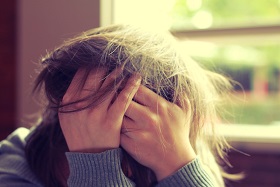 I think that everyone I have ever met is under some sort of pressure. I think being under pressure for lengthy intense periods of time is not good for anyone. Speaking for myself, I find that I don’t handle pressure well. I personally think my difficulties are magnified by my experience with Autism. Autism colors every aspect of my life, especially when I’m under a lot of stress.

My Autistic sensory system kicks in when I’m stressed out, for example, my sensitivity to noise increases exponentially. It makes me feel like regular sounds are as loud as if I were standing next to a rock band playing at maximum volume. My ability to deal with people I don’t know touching me decreases significantly, and if it’s really bad, I “zone out.” As in, I’m here in the flesh but my mind is not responding to outside stimuli. I tend to “collect” stress the same way some people collect baseball cards or action figures. Sometimes I trade one set of stressors for the newest type of stress or worries. I get stressed about things that someone who is more typical would be unlikely to find stressful. I’m also concerned about bumping into things all the time. I’m really clumsy and I have diffculty predicting other people’s movements. I have a hard time reading people so I miss a lot of the conversation or situation. I am constantly trying to understand what people expect or want me to do. What is really difficult and makes things ten times harder is the feeling of constantly disappointing people no matter how hard I try. Subtle language like sarcasm, jokes, and slang often go right over my head. I’m trying my best to blend in, but I often feel like I stick out like a sore thumb. That’s a short list of my current collection of stressors. What about you? Do you think having Autism has different stressors and pressures?

I feel like I’m floundering under the pressures that I impose upon myself, as well as pressure from others. I feel pressured to be like everyone else and minimize how I express my Aspergers. I feel pressured to be a good daughter, sister, friend, and role model. I feel like others believe since I look “so good” that I must be stronger than others, so therefore I really don’t need any help at all. Since I’m “high functioning” I must not have any problems at all, right? I don’t look like the stereotype of a person with Autism so I have a hard time expressing to people that I have similar struggles. Have you also had this experience as well? I have found that the more successfully I mask my symptoms of my diagnosis, the harder it is for others to believe my struggles! I’m under so much invisible stress and pressure that it results in having a huge explosion of raw emotions such as sadness, despair, anger and frustration. I have a hard time identifying and explaining my emotions to most people. That leads to my version of a meltdown which can include extreme irritability, an incredibly short temper, increased impulsivity, and the use of some not-so-nice four letter words.

Most people don’t understand that meltdowns often result from increasing invisible pressure that one finally hits his or her breaking point, and it’s not sudden or random. We, like all people, have triggers and they are just as valid as anyone else’s even though they may seem to be unusual or unorthodox triggers that surprise some people. As you can tell, this a bit of a sore spot for me as I have had people tell me to “keep it together” or that I am “overreacting.” I dream of a future where there is less stress and pressure on everyone, regardless of their differences. A future where differences among people are treasured, not just tolerated.