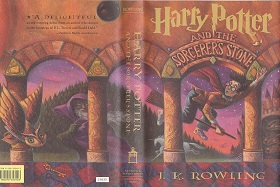 Growing up, I always had a fascination with magic. The power to make something appear out of thin air, change animals into particular objects. The ability to create and manipulate the fabric of reality with just a few chosen words. Magic isn’t real of course, but when I discovered the Harry Potter series as a young child, the world of magic became a reality as I engrossed in the stories the author J.K. Rowling wove. Within those books, I learned to understand the power of friendship.

If you aren’t familiar with the Harry Potter series, it stars a young skinny adolescent named Harry who lives with his Aunt Petunia, Uncle Vernon and their spoiled son Dudley. Harry isn’t treated very kindly by his relatives with his only living space being a small cupboard under the stairs. He does most of the chores around the house and is constantly berated by his own family. Harry considers most of his life to be mundane until his 11th birthday where he receives the first piece of mail addressed to him. Initially, his family throws away Harry’s letters but more arrive and more get thrown away until one day, a hulking giant of a man named Hagrid delivers Harry a message stating that he has received admission into Hogwarts School of Witchcraft and Wizardry. Harry’s life is turned upside down after finding out that magic is real and the true origins of what occurred to both his mother and father.

Skipping ahead slightly, to the day Harry arrives at platform 9 ¾ (a train station), this is the day he meets two irreplaceable friends, one named Ron Weasley and the other Hermione Granger. Ron Weasley comes from a large wizarding family. 7 in total and all remarkable for their red hair. Ron’s family doesn’t have a lot of money, so they make due by shopping for bargains and trying to be frugal with the money they have. Of the two best friends Harry has Ron the one who dives into situations without thinking but almost always has good intentions and his family essentially adopts Harry as a second son, giving him the love and care he never had while living with his aunt and uncle. Hermione Granger is the classic bookworm. She’s always focused on her studies and takes breaking the school rules quite seriously. Hermione is one of the few wizards who come from a muggle family (muggle meaning non-wizards). Initially, when she meets Harry and Ron, they both consider her to be stuffy and uptight. But without her intelligence and foresight throughout the series, Harry and Ron wouldn’t have made it through certain events unscathed. Hermione was also the first female character I read about where she’s not the romantic interest of the male main character.

The entire Harry Potter series defined imagination for me. I’ve always been an avid reader even at a young age, but I could never place myself as vividly in a character’s world as with the Harry Potter books. School was pretty tough for me due to bullying, but I could always retreat into the world of HP and escape. I can’t recommend these books enough, or even you aren’t a reader, the entire series is in film form as well, and the movies are quite faithful to the literature.