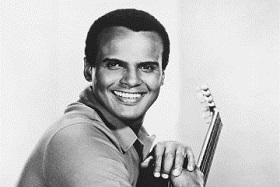 Many, I am sure are familiar with Harry Belafonte’s illustrious career but I’ll highlight a few notable achievements. In his early life, he sang in jazz clubs in midtown New York in order to pay for his acting classes. At those clubs, he was backed by legends; Lester Young, Charlie Parker (band), Miles Davis and Max Roach. Mr. Belafonte’s debut album, Calypso (1956) was the first LP to sell over a million copies within a year, maintained 31 weeks at number 1, 58 weeks in the top 10 and 99 weeks on the US charts. He is also notable for uniting different genres of music. Harry studied American Folk music via the Library of Congress’s music archives and melded that with calypso music originating from Trinidad and Tobago. The most well-known song of Mr. Belafonte’s is “The Banana Boat Song.”

Music, of course, wasn’t his only contribution. He was a close friend of MLK’s and a staunch supporter of civil rights. During the seminar that I attended, he recalled an evening where there was a night in his childhood when his mother (Melvine Love) came home from work, tired and exhausted; exasperated that in America a land of promises and ideals how it could have so much inequality. She spurred a young Harry to always speak out against injustice even when it wasn’t popular. And that’s exactly what Mr. Belafonte did even when he was partially blacklisted during the McCarthy era.

One thing that really stuck out to me was Harry Belafonte’s desire to reach a diverse audience. He’s played all over the globe and one of the reasons why he made such an effort was to combat blacklisting that other civil rights activists faced at the time. Many musicians, unfortunately, weren’t able to maintain their careers after speaking out against the plight that affected African Americans. Harry did not deal with blacklisting to the same degree because with his music all over the world he could go other places. The UK, countries in Africa, Jamacia, he wasn’t beholden to a single country.

He also recalled a moment with Martin Luther King Jr. during a time shortly before his assassination. (Harry Belafonte supported MLK during that era financially because he did not make a lot being a church preacher and also fundraised to bail other civil rights activists out of jail.) and asked him how he had the resolve to integrate Black people into a burning house proverbially speaking because at the time most supported Jim Crow laws. Martin thought a bit and told Harry, if the house is burning we’ll have to become firemen. The resolve to change even the direst of circumstances is a manifestation of fortitude and a belief that actions do lead to results. That was MLK’s dream realized after his death.

There a plethora of stories that I was able to listen to at the event, more than I can write about in a blog. Tales of courage, strength, determination, willpower, and spirit. And, I’m sad to announce that this was his last public event. At 90 years of age, Harry Belafonte is retiring. He and his wife plan on enjoying a long-deserved vacation, but he did say he wanted to write a book and speak more candidly about his life, and he said: “jokingly, at my age, there isn’t anything else people can do to me.”

I was honored to be in Mr. Belafonte’s presence that night. Seeing someone who was as ardent in civil rights activism as he was in music shows that a person can have a very fulfilling career without sacrificing core beliefs. There is no either or just doing what is right, and sharing the experience of music that brings us all together.