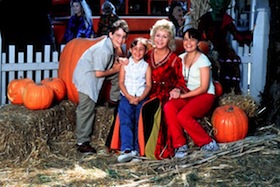 October is my favorite month of the year. It’s a turning point. The air cools, it becomes crisp and clear, humidity leaves and taking walks outside is refreshing and restoring. It’s also the last month before we turn our clock’s forward and it gets darker a lot sooner. So, while I do enjoy longer evenings with the sun, it’s a trade-off, for staying inside with a warm drink and watching my favorite films.

One of my favorite Halloween themed movies are the ones that aired on Disney. Halloween Town came out in 1998. It was a story of a family who had the unusual tradition of not going out for trick or treating. Their mother forbade it without giving much of an answer, until one day their Grandmother Aggie Cromwell (played by the late Debbie Reynolds) shows up intending to get the family more involved in Halloween. She reads her grandchildren, eldest daughter Marnie, middle child Dylan and youngest Sophie, a story about Halloween Town, a magical place with monsters, witches, and zombies. Sophie actually points out a picture in the book and says it looks like her older sister Marnie. Aggie laughs and then sends the children to sleep.

Events follow and it turns out, that Halloween Town is a real place and that it’s dealing with issues that Marnie, her siblings, and her grandmother confront. As to what those things are? I won’t reveal them. Instead, I’ll talk about some elements that stuck with me years later.

The most notable attribute of Halloween Town is the strength of the female characters. Marnie, her grandmother, younger sister, and even her mom all have strong core values in what they believe, even if there is a disagreement between them. They’re still family at the end of the day, and that’s what’s most important. The second is that it subverts character stereotypes. Marnie is the heroine of the story and she takes charge. She has a great curiosity for her heritage and wants to learn more about a place where she can interact with werewolves and ghosts. When things start to occur and the residents of Halloween Town begin to change, she doesn’t shy away from confronting it to get to the bottom of the mystery.

This film series has quite a few sequels, Halloweentown 2: Kalabar’s Revenge, Halloweentown High, and Return to Halloweentown. The core themes, family and strong female representation are always present. I think movies and shows like this are important because they can instill a sense of self-esteem in young children because they’re being exposed to diverse roles and can see that a damsel in distress is outdated and that girls can confront great obstacles. I’m happy that I was able to watch such diverse media when I was young and I’m still open to watching diverse media today. I think it would be really cool to have an autistic female character in a Halloween themed show. Autistic representation in the fantasy genre is something I wish we had more of.

Halloween Town, especially the very first film will always hold a place in my memory. Every Halloween I have a marathon with friends or cousins and watch them. Reminiscing about the old Disney channel and when we used to go out trick or treating. Nostalgia is going back to a warm place, where things weren’t all so complicated.

Magic was something I wished was real when I was little kid, and seeing Halloween Town made me imagine that I could have a Grandmother visit for Halloween and tell me that there was a place where magic existed. As far as Halloween themed movies go, this has one of my strongest recommendations. So please, if you have a chance, watch this one!