Graduation: Ideas About The Future 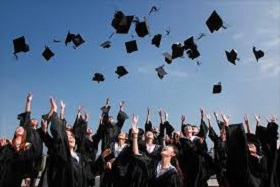 So it’s been a few weeks since I’ve graduated from school and despite the fact that I feel nervous on what to do next, I had some thoughts about whether I should or shouldn’t further my education. At first, I went on the thought thinking that I should because I have done so much at the Community College of Philadelphia as a part-time student and worker. Also, it was where I had the inspiration to broaden my horizons and becoming a public speaker and an advocate for autism awareness. Since this has been my pursuit for 2 years, maybe I should go towards that direction. I feel confident that I should do more towards that direction because I have always wanted to let others know about my disabilities and felt thankful for what I have been able to do for myself and others in that area.

Then I have thoughts that maybe I shouldn’t go in that direction, because it was a very bumpy ride at CCP. I just got stuck, confused and lost at times, but somehow managed to get it together, and didn’t think that something like that should go into an actual university. Either way, both thoughts had me thinking like this for a while if I should continue to move forward or try to get all the classes I need for my goal of public speaking and possibly mathematics. Despite the fact that it is a hard process at this point of my life, I don’t want to feel like I have overexerted myself and I think that’s the only thing that matters.

So, to keep all things on a positive note, I will never give up what I love and that’s going to be with me always. Even if I do decide to move on from school, everything that I’ve learned so far has benefited me and I intend to use that knowledge to the best of my ability, even if I decide to not go as far as I thought in the field of education.