Get out of the house! No. 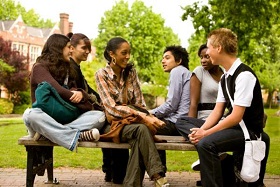 For most of my life my parents have been trying to get me out of the house and socialize with my friends. For my part I’ve resisted their efforts most of the time. It’s the deeply held belief that a “normal” kid should spend a lot of time with their friends that makes my parents think that I should get out of the house. The thing is that I don’t need to. I already get enough socialization when I go to work and when I went to school.

As a kid I didn’t really enjoy other people’s birthday parties because I barely knew the people that would show up, I rarely knew people’s name, and I usually found myself on the sidelines. It was the same with most gatherings that I would go to. But at school I knew most of the people that were around me and could interact with them easily. At work I frequently talk with my coworkers and share a joke or complaint. With the people that I share an interest with I frequently have long conversations with that coworker. At the studio that I do Tae Kwon Do I interact with a large number of people with different skills, backgrounds, and personalities.

My parents don’t have to push me to be more social and be an extrovert, I’m already being social enough. Being semi-reclusive is a part of being an Aspie but can be managed by doing the right activities. Now they and the rest of the world just have to learn that.