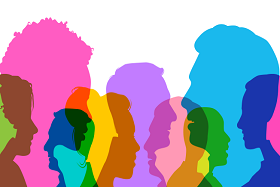 It’s Autism Awareness/Acceptance Month. This time of year draws attention to those with ASD, can provide eye-opening education, and gives those on the spectrum a megaphone to utilize to discuss pertinent issues on their mind relating to ASD. Previously, I wrote in detail on how far the discussion about autism has come, and this year I would like to discuss diversity and inclusion.

Diversity isn’t just choosing someone from a marginalized demographic to act as a facsimile token. It’s going up to someone in good faith and asking them how they’re doing. It’s listening to their response and not taking it personally if things aren’t working out well for them. It’s making an effort and a pledge to think outside of the box to create a better environment. Most importantly of all, it includes them in discussions that are directly related to things from assistive touch devices to them having positions in organizations that directly affect their care and wider-public perception.

Last year I was able to attend the premiere of the film Deej, and meet DJ Savarese personally. The piece was autobiographical and followed Deej through high school, his social interactions, visiting Washington, to choosing his higher education. DJ types on a text-to-voice synthesizer, and a wide range of interests that include poetry, filmmaking, and advocacy. The movie showcased the experiences that a non-verbal autistic person can have while interacting life’s encounters. That sometimes accommodations can be met and at other times not so much.

Sometimes I’ve seen adverse reactions to inclusive efforts. In some instances, making the push for diversity is met with apprehension because there is an inference of diverse but not qualified rather than diverse and qualified. If a person is directly dealing with conditions and life circumstances due to their situation then, I would think that would make them very knowledgeable about the world they find themselves in, not ignorant.

With everything that I’ve said, we’ve still come a long way. Certain celebrities are not controlling the airwaves with the falsehood that vaccines cause autism. Non-profit’s that directly serve and take input from those they assist. And personally, making an effort to ensure that my fellow autistics continue to have a voice. I’ll be doing my best going forward, one step at a time.

If you would like to know more about the film Deej, please visit his website at: https://www.deejmovie.com/