Curious Case of the Dog in the Nighttime Reading Review 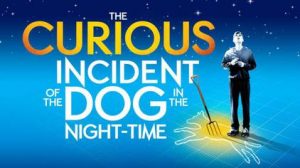 So, there was a meeting that I had about 2 years ago that caused me to relate to the issues of Christopher Boone’s Character in Mark Haddon’s The Curious Incident of the Dog in the Nighttime.  I have found it hard to discuss all the scenarios that went into the book.  It’s about a young 15-year-old lad that has autism and pretty much a hard time dealing with the way people act. The real issue lies in the of the death of his neighbor’s dog, Wellington.  This pretty much causes Boone to go out an imitate one of his favorite role models, Sherlock Holmes.  Because of the stories he has read he decides to begin an intense detective adventure that eventually becomes this breakaway of personality.

I would say that social aspects contribute to what one person with autism deals with as there will be points where Boone is generally talking to the audience. One of the examples I can bring up is his love for prime numbers, almost to the point that it become a preface to various chapters.  Even though the alignment of the numbers seems off to the readers, slowly you begin to understand that it’s a part of the regular format of the book.  You also begin to better understand his personality through the process of reading the book.

It was the oddest start for me to talk about simply because it seemed like the things I would do on a daily basis. Christopher Boone would either create his own sympathy to the audience by breaking away from the story and explaining how he relaxes himself playing a skilled game of chess or even do intense mathematical equations, but I guess that is kind of relatable for me, a person with Asperger’s.  I say this because I often talk about similar topics in my weekly blogs while attempting to describe to others my perspective on the topic.

Most of his interactions focus on school, his neighborhood and his parents. Learning about the dog has made Boone want to learn more about Wellington, the dog who was found dead, and also how much he loves math just to calm himself down. It was pretty interesting to read something where math was used to relax someone because I would just walk or read comics to calm myself down. The reading itself does take a pretty interesting route of explaining Christopher Boone and how he’s really trying to be a detective to find out how he the dog dies…, which I won’t spoil here.

Overall, I enjoyed reading this book because it helped to provide insight about people with disabilities.  Even though that’s what this blog is about, there’s more to it than just everyday life in the mind of one person whose life can be hard to understand. It’s more how it was broken down for one to understand because sometimes parents, friends, families, and even classmates who are close to someone with a disability including Autism and Asperger’s are sometimes difficult to understand or relate to.