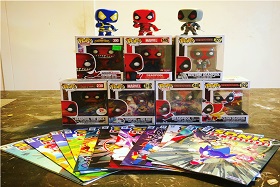 If there’s one thing that’s completely stood out about me for the past 5 years, it’s been the fact that I have slowly made a collection in comic books. At first, I never really saw the interest in doing so, but I guess over time it just stuck with me. Overtime, I began to take interest in collecting comic books and things comic book related. So, when the moment came when I finally saw Avengers Endgame with my friends (April 25, 2019), I felt that not only did I just watch moments of a movie, it made me feel good about my comic book shopping and I even wanted to collect more.

So, like I mentioned before, at first I didn’t really have interest in collecting stuff, maybe I thought it would make me a hoarder or it just was too much money. However, I made a hobby out of it and really enjoyed it. I can recall my father giving me 2 model cars, a 1955 Ford Thunderbird and 1998 Volkswagen Beetle, to start my collection and I never looked back. I started to develop an interest in keeping them around that I wanted to put my own take with it which started with me collecting Sonic the Hedgehog comics, Deadpool Pop figures and manga issues of Rosario+Vampire Season II. I guess I liked it so much that my comic collecting continued after I saw certain movies of the Marvel Cinematic Universe and Batman and watching shows like CW’s Black Lightning and the Outsiders; I started collecting more issues such as Civil War II, Youngbloods, and The East Coast Avengers.

I guess the whole idea of collecting comic books led to me wanting to try collecting Funko Pops (and other figurines), as well as video games. I had to be careful while collecting them, so I didn’t misplace anything, because it’s usually around this time of the year where I start going to more comic conventions. I even get involved in free comic book day (which falls on the first weekend of May). Despite the fact that I do have a lot of comic books and such, I don’t really have heavy intent on collecting everything, even though it may seem like I do from the amount of stuff that I have. However, I do enjoy it and I do set a balance on what I do want to have by it’s listing and eventually putting my issues in order.

I don’t think I often talk about how I do have heavy interests in comic book collections but I often hang with my friends at comic conventions and video games stores more around this time of year. It’s a great time to socialize and get out more, also a time where I’ll try to carefully pick what I want to add to my collection of comic books. Hope you all have a great spring onward, and good times in the summer!