Does Society Have Empathy for Celebrities Who Struggle Mental Illness?

Money doesn’t buy happiness. That’s a phrase we all grew up hearing. While having a significant financial status provides shelter, security, and other basic needs accounted for, it doesn’t mitigate mental illness.

We’ve all grown up with celebrities that we loved who struggled or even passed away due to mental illness or substance abuse, and a question that always comes up is: They had all this money, fame, and attention. Why would they do that to themselves? The notion that wealth can insulate you from all hardships a sentiment that is all too common.

This month, I would like to shine a light on a few celebrities who have dealt with mental health problems and how empathy can support them.

“Hit me Baby One More Time” was a hit single by Britney Spears when I was a kid. Her debut album was the first CD my parents ever purchased for me, and I played that endlessly. As I grew older, I wasn’t as fervent as a fan, but I still listened to the music she released on the radio and generally had a high opinion of her artistry.

Fast forward a few years after that, and Britney Spears had a public breakdown shortly after having her first child. She shaved her head, and paparazzi chased her endlessly until she was broken. The general public opinion of that event was laughter and that it was one big joke. This incident then allowed her father to make a legal plea for conservatorship of Ms. Spears. If you’ve watched the news or the Netflix documentary on Britney, you’d know that the arrangement is far from perfect, and Spears is now fighting in court for her autonomy back.

Now that I’m older and a certified peer specialist and mental health advocate, I could see how much pressure was on Britney Spears at the time. You had a girl thrust into the spotlight from a young age with no privacy or respect for her emotional well-being. It’s not hard to see why she couldn’t take it anymore, and the reaction to all the pressure was a normal response.

Today, many are raising awareness on Britney Spears’ ongoing legal fight, and her fans, myself, include the hope that she can reach a point where she’s able to live her best life possible. When someone makes a rash choice like shaving their head, it’s a cry for help and a situation that needs to be taken seriously.

When most people think of Robin Williams, warm memories of laughter and a pleasant and friendly personality in films are what we think of most. Alladin, Mrs. Doubtfire, Jumanji, Flubber, and his final film role as Dennis, the dog in Absolutely Anything are just a few of his roles in his long, illustrious career. 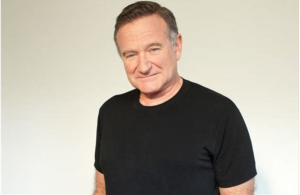 I don’t think my childhood would have been the same without Robin Williams in my life. Hearing about Williams’s suicide hit me hard, and facts surrounding that situation were sparse at the time. The public at large wondered why? A man who had everything had ended his life in such a tragic way. As the facts came out about his health issues, more context painted a fuller analysis of his circumstances.

Getting older can bring forth an array of health issues that we’ve never considered, and we must offer support to anyone of any age who is struggling with something.

Robin Williams was a great man whose legacy shouldn’t be tarnished by how things ended. Robin made companies hire the homeless for work because he knew people were trying to get by and needed the work. His character, without question, was exemplary.

Britney Spears and Robin Williams showcase that hardships can be life-changing regardless of being a celebrity or having money. Meghan Markle, Duchess of Sussex and Prince Harry’s wife, had a bombshell interview with Oprah a while ago where she disclosed that she struggled with mental health issues.

The public response was mixed. Some had empathy for her while others said: “She’s a Princess; it was a perfect life.” The latter reactions miss the fact that wealth and status do not render someone invulnerable.

Empathy can go a long way, and celebrity status shouldn’t be a factor in whether someone can have problems. I wish more people learned from incidents regarding Robin Williams, Britney Spears, and Meghan Markle.