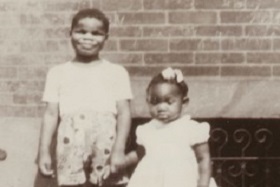 February is Black History Month. It’s the time of year when the United States of America remembers the plight of enslaved Africans and their African American descendants. Historical figures like Martin Luther King Jr., Rosa Parks, Rosetta Tharpe, George Washington Carver, Madam C. J. Walker and Harriet Tubman are all notable for their robust accomplishments and contributions. While mentioning them, it’s important to also remember that Black people with disabilities also left their mark on history. Oftentimes, the narrative of those who are disabled or have dealt with other impairments is ignored. So, I’m choosing to write about an African American who was a former patient of the now infamous Pennhurst.

In 1903, an institution by the name of Pennhurst State School and Hosptial was given approval by the PA state legislature. Over its nearly 100-year operation, it was marred by accounts of abuse, neglect and a lack of understanding and support for caring for those that were deemed disabled. Children, past the age where they could have been walking, were trapped in cribs, nurses too overwhelmed and overburdened were unable to teach them. Other patients deemed ‘high-functioning were utilized by the hospital to care for the grounds and even other tenants with little to no pay. The hospital was finally closed in December 1987, after Halderman v. Pennhurst State School and Hospital was brought to the US Supreme Court, which eventually lead to a settlement that stipulated that services former patients could use would be community-based.

One voice among many who raised awareness about Pennhurst was former resident Roland Johnson who was a patient of the State School from 1958 to 1971. Johnson was sent to the institution after issues with care arose at home with his parents and siblings; that combined with the then current narrative that those with disabilities couldn’t live at home and would be better served at a hospital, permanently. In Roland’s book “Lost in a Desert World” he accounts his experiences at the hospital. He mentions that the staff would send patients who were acting up to a punishment ward. The ward was run down and had holes in the wall and in the floor and smelled terrible. It is also mentioned that the staff could do little to nothing regarding patient interactions that left Roland scarred from certain experiences.

Due to the closure of the facility, though, Roland was able to leave and lead a life in activism. Mr. Johnson was President of a Philadelphia Chapter of Patient Advocacy. He spoke to case managers on how to care for individuals who are leaving institutional care. Looked into allegations of abuse at a facility at Pine Hill and helped people leave, Embreevile, a state institution. Roland Johnson also spoke at the Third International People First Conference, in Toronto, June 1993. His prominent message was “Are You in Control” advocating that patients had the right to tailor their own care and that their opinions matter when it comes to mental health treatment.

Reading about Roland Johnson in his book, and having to ability to attend a screening of “I Go Home,” A Pennhurst documentary and listen to the lawyer who represented Halderman was a very enlightening experience, and I can’t even begin to cover the history of institutionalization in PA. But relating Roland’s experiences to mine, I think that without those that came before me and were able to raise awareness about State Hospitals, Autism (which wasn’t really known by the name at the time of Pennhurst) was something I’m sure people were sent to institutions for. And I have to ask, would I and others have been sent there? So, I will always be thankful for those who got through immense hardships and still have more to give to society as a whole. And I would consider Roland Johnson a contributor to Black History.