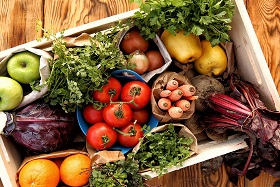 As someone who was always thin, I never was one to focus on what I ate. My parents begged me to eat more because as they said it, “I was just skin and bones.” Growing up and going through the trials and tribulations of life, I put on weight. It was good to put on a few pounds but over the years, those pounds accumulated, and I found myself heavier than I wanted to be. Now was the time to lose weight, and do it sustainably. Over the past few months, I’ve lost 11 pounds, and I feel better. This month, I’ll talk about how I got started with my weight loss.

The wake-up call to take note of my health started with a routine doctor’s appointment six months ago. I went in for a routine physical, and everything checked out except for my BMI, my doctor noted I needed to lose weight and give me a few general tips to get started. Starting things off, I’m a picky eater, and I don’t have extra cash to pay for something like Nutrisystem. And exercise while something I did eventually incorporate into my routine played a role, I wanted something affordable and straightforward to supplement that. While doing research, I came across something called intermittent fasting, and it didn’t cost anything, so it appealed to me.

Intermittent fasting is “an umbrella term for various eating plans that cycle between a period of fasting and non-fasting over a defined period.” To be more specific, you have a particular window where you can eat followed by fasting. Fasting isn’t a new concept as it’s been used by different religious affiliations and those who want to be a little more mindful of what they eat since the start of human history. It’s not even a diet. What it did for me was allow myself to think about what I’m eating and when I had to make a note of that consciously.

For myself, I had an eating window of 9:00 am to 4:30 pm every other day. After 4:30 I could still have water and tea, but snacks were off the table. What I noticed is that I’m grazer and I like to snack on things while I’m doing other stuff. When I started fasting, I realized I didn’t need a snack most of the time. I also thought about what I could eat, during that window and I chose healthy options like oatmeal or other meals that were fulfilling without a lot of sugar. I started to lose about a pound or so a week, just with fasting and taking a daily extended walk. Fasting worked to make me pay more attention to what I eat and what I need.

Fasting isn’t for everyone. When I started, I cleared it with my doctor, and they said it would be safe for me to do. It may not be something that will work for you, and that’s okay. If you want to lose a few pounds, there are so many ways to do it, and your doctor will be able to give you advice on how to begin a weight loss plan. Fasting worked for me because I had to consider what I would eat during that window of time and I chose healthy options. That can be done without fasting; for me, I just needed a little discipline.

Today, I’m happy with where I am with my weight, and while I have a few more pounds to lose, I feel like I have control of things, and I can do it.